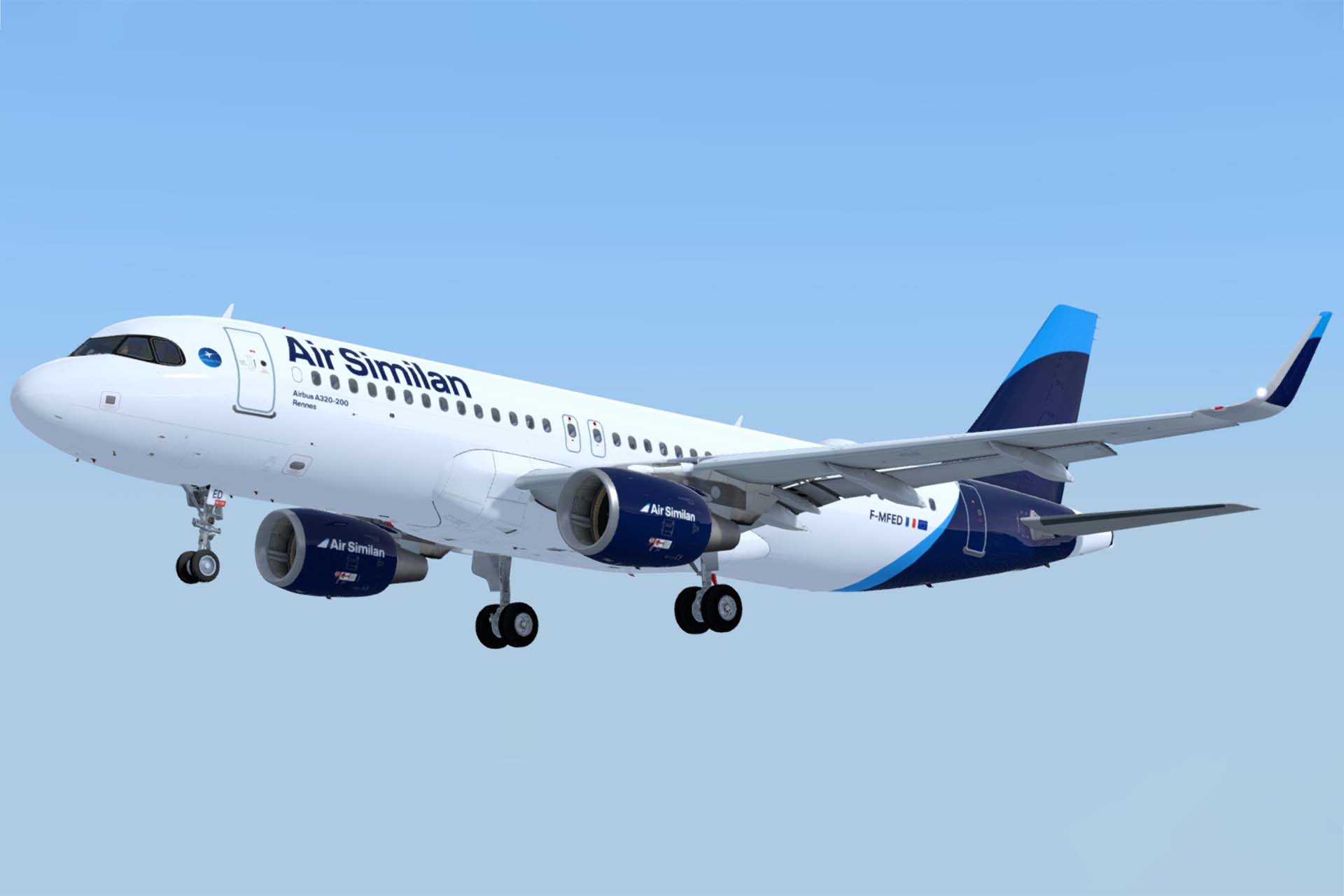 Paris, October 2nd, 2021 | Air Similan has implemented many new features and modifications (retrofitted A320s, livery updates with the development of new Fleet Packs, reinforced and added destinations, a new recruitment system and a completely redesigned Intranet…). Discover them in detail.

Three of the six Airbus A320-200 owned by Air Similan have been retrofitted with Sharklets. These are the last three A320s received (F-MFED, F-MFEE and F-MFEF).

These are equipped with a different cabin from the A320-200 Wingtip fences because they are suitable for more "Business" and distant destinations. They are configured to accommodate 16 passengers in true Business Class seats - with latest generation flatbeds and screens - and 138 in Economy Class, for a total of 154 passengers, making it one of the least dense commercial A320s.

Learn more about the fleet

- Fixes to the Airframe Configs of the entire fleet on the Flight Sim Labs Airbus A320.

- Update of the Airline Pack of the Flight Sim Labs Airbus A320: addition of all EFB-related functions for A320s equipped with Sharklets (wallpaper, color customizations in line with Air Similan's visual identity, Air Similan checklists for A320…), additions of destinations to the Stands assignment system on arrival, corrections made to the configuration files for the airline's fleet…

- Creation of the complete Fleet Pack for the PMDG Boeing 737-800NGXu BW.

- Creation of the complete Fleet Pack for the Zibo Boeing 737-800X.

- Changed flight numbers and callsigns for flights outside of Europe.

All these changes bring the number of destinations offered by Air Similan on its network to 73.


Update of the recruitment system:

- Passing a short theoretical test is mandatory to join the airline. This is a theoretical exam bringing together various bases on simulation, controlled flight, knowledge of the virtual airline ...

- The test is passed when the applicant achieves a score greater than or equal to 75/100.

- If they pass the exam, the candidate will have access to their pilot area on Air Similan. From then on, he will benefit from the “Student” status; he will thus have two weeks to carry out a first rotation under Air Similan. If all goes well, he will subsequently be assigned the status of Airline Pilot: he will officially become a pilot for the airline. If the first flight is not carried out during the first two weeks following admission and the future pilot has not justified his absence from the airline, he will be dismissed from Air Similan.

- In case of failure of the entrance exam, the candidate will have the possibility of being supported by the National School of Virtual Aviation (ENAV) which will take care of teaching him everything before its admission to Air Similan.

- Once the status of "Airline pilot" has been acquired, the pilot will obtain ranks as and when his flights are carried out. At the end of certain grades, it will be possible for him to request other type ratings in order to fly on other aircraft.

- A second way of entry into Air Similan is possible for beginners in simulation. These can go through the National School of Virtual Aviation (ENAV), offering beginners an entrance exam model accessible to all. This virtual school will support a more or less long training adapted to the level of the applicant in order to make him perfectly autonomous on IVAO, on his device and able to join Air Similan. Applicants are offered a theoretical exam in the form of a MCQ as well as a practical exam with an instructor, all carried out within the ENAV. If the training at the National Virtual Aviation School is successful, the pilot will receive a signed ENAV certificate and will have access to his pilot area on Air Similan: he will officially become a pilot for the airline. Passing through the ENAV exempts the candidate from the entrance exam on the Air Similan site.

- Added essential features (a complete guide to getting started with Air Similan, a system for obtaining new type ratings on other aircraft, a system for sharing screenshots taken during Air Similan flights ... ),

- Graphic redesign of all Intranet pages: redesigned, more airy and refined design. Add hover effects, readjust colors to match Air Similan's graphic charter, add as many photos as possible of aircraft as well as cities to illustrate the pages,

- Added features on some pages.